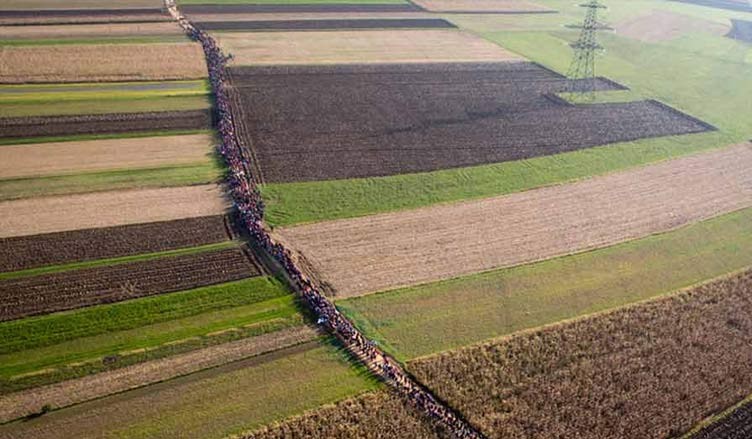 The displacement of millions of people from Syria, Iraq, and Afghanistan are overwhelming the already struggling EU. Europe is unable to manage the logistics and management of the emergency respons for efficiently controlling the crisis.

Croatia has registered 11.500 refugees in on single day, accroding to minister Domagoj Dzigulovic on Sunday 25. October. Slovenia has registred 58.000 in one week, with as much as 13.000 pr. day. At least 3000 refugees crossed the Croatian-Serbian border on the 24. October. 48.000 arrived in Greece in just five days, according to AP. Estimated arrivals across the Schengen borders to the EU is at 681.000. German newspaper Bild reported that as many as 1.5 million asylum seekers could arrive in 2015, scaled up from the previous estimate of between 800.000 and 1 million. The over 5 million regufees in Syria are expected to emigrate the war-torn country later this year. Also see UNHCR and Refugees of the Syrian Civil War on Wikipedia for statistics.

In a decade, Pakistan’s nuclear arsenal could grow to become the fifth largest in the world, according to The Bulletin of Atomic Scientists. The Nuclear Forensics and Attribution Act (HR 730), still working its way through Congress, aims to establish a process to reliably identify the sources of nuclear detonation that we lack at present. The first two paragraphs of the Bill:

Via “Anonymized Deterrence” by Richard Fernandez for the Belmont Club

Series of arson attacks in Sweden and Norway

Sweden is expecting up to 190,000 asylum-seekers this year, second only to Germany in western Europe. As many as seven arson attacks on Swedish asylum centers have taken place in just the last two weeks. The total number of such alleged attacks has reached 20 since the beginning of 2015.  Arson attacks at asylum homes raise fears in tolerant Sweden, according to Yahoo News. The school attack killing a pupil and a teacher in Sweden was a racist hate crime, according to The Guardian. Asylum centers has also been arson attacked in Norway.

Spanish authorities have implemented a biometric screening system at La Línea de la Concepción, a major border between Spain and Gibraltar. The project was contracted by the Spanish Ministry of Interior and the National Police Force, according to FindBiometrics.