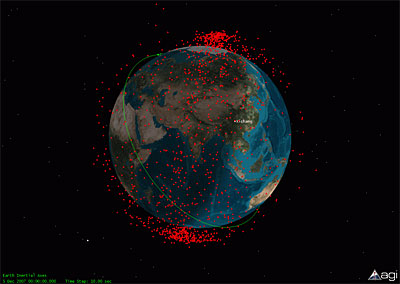 Given the amount of debris a single ASAT weapon can create,
as this illustration of last year’s Chinese ASAT test shows,
imagine the debris created by the deliberate use of ASATs. (credit: CelesTrak)

As space technology spreads, the incentives for small and medium-sized states to seek space warfare capability increases. A dictator who does not want to end the way Saddam Hussein did may seek way to hurt US warfighting capability in such a way as to impose major costs and casualties on the US early on. The destruction of a major US satellite would be both a substantive and a symbolic victory over the US. Hitting a number of satellites would increase the effect.

Such an attack would result in a major increase in the amount of debris orbiting the Earth. This would be the equivalent of a “scorched earth” policy if enough deadly debris were created. One possibility that has not been publicly examined might be to build highly- or ultra-destructive ASAT weapons that would literally pulverize the target and leave nothing behind but bits of dust. Even small particles can do some damage, but paint flakes like those that sometimes hit space shuttles have not managed to destroy an orbiter.