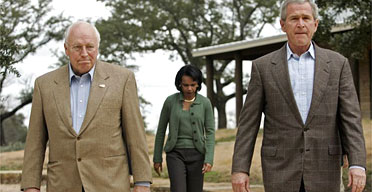 WASHINGTON, July 19 (RIA Novosti) – The risks of an accidental nuclear war have increased since the Cold War as Russia’s early warning capability has deteriorated, a former U.S. defense official said.William J. Perry, a senior fellow at the Hoover Institution and co-Director of the Preventive Defense Project at Stanford University, said in a congressional testimony Wednesday that “the danger of nuclear war occurring by accident” still existed.”Both American and Russian missiles remain in a launch-on-warning mode,” Perry, who served as U.S. defense secretary in 1994-97, said. “And the inherent danger of this status is aggravated by the fact that the Russian warning system has deteriorated since the ending of the Cold War.”Since the collapse of the Soviet Union, Russia has heavily depended on its radars located abroad, particularly the Daryal facility in Azerbaijan and two Dnepr stations in Ukraine, near Sebastopol and Mukachevo.

Some reports said the outdated radar facilities that Moscow is renting on the territories of former Soviet republics were in poor condition, and that “holes” had appeared in Russia’s early-warning missile threat coverage.

In the same testimony, Perry blasted the Bush administration for concentrating its efforts on building defenses to protect the U.S. from a potential ballistic missile threat, while downplaying the danger of nuclear terrorism.

“The centerpiece of our government’s strategy for dealing with a nuclear attack is the National Missile Defense system now being installed in Alaska,” he said.

“But the greatest danger today is that a terror group will detonate a nuclear bomb in one of our cities,” the expert said.

“Terrorists would not use a ballistic missile to deliver their bomb, they would use a truck or a freighter,” Perry said, adding that a missile shield alone would not reduce the nuclear threat to the country.

Colonel General Valter Kraskovsky, a former commander of the Soviet Union ballistic missile defense, dismissed Perry’s statement as an element of the information war the U.S. is waging against Russia.

“We should have expected such statements. The U.S. will continue pressing this issue because its main goal is to present Russia as a country owning powerful retaliatory weapons which it is incapable of controlling. They will be striving to disarm us on any possible pretext – for instance that we cannot oversee everything, that we can make a mess of things, or accidentally deliver strikes, and so on,” Kraskovsky said.

He said the Russian warning system properly monitored near-space, but that the situation could change if intergovernmental agreements on Russia using the two radar stations in Ukraine were revoked.

“If the stations stop operating in the interests of our country, the Russian air defense system will have problems,” Kraskovsky said.

Via RIA Novosti. Also “Cheney pushes Bush to act on Iran” via the Guardian.

3 thoughts on “Current nuclear threat worse than during Cold War”