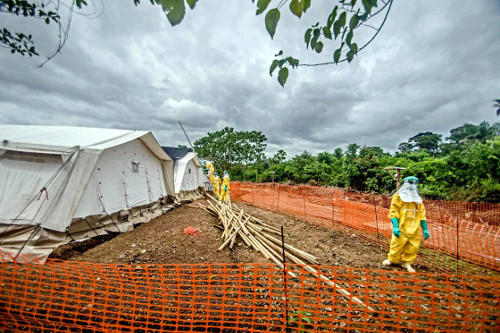 Feeling The Heat, Burning The Suits
(image from NPR)

The World Health Organisation reported that as of July 17 there had been 1,048 cases in the outbreak and 632 of those people have died.

Cases have occurred in the region of West Africa; Guinea, Sierra Leone and Liberia, with suspected cases in Congo and Uganda. This is the most widespread outbreak since the disease was identified in 1976 in Sudan and Congo.

WHO and Médecins Sans Frontières (MSF) treat patients and try to contain the Ebola outbreak that is currently gripping the vast region. Their challenge is to contain the highly deadly disease, with a chilling 60-90% death rate, by stopping human to human transmission.

Health workers also struggle to convince the population to abandon their local food tradition which includes bats, monkeys and other wildlife found in the forests and are known to carry the Ebola virus. This is food tradition is also a multi-million industry. In addition, certain religious groups are blaming the health care workers for spreading the virus.

The situation should concern the entire health and emerging disease community on the planet. If this virus remains uncontained the probability for mutations increase. The virus might find others hosts like pigs or other household animals. The Ebola virus could become the mother of all pandemics.

Scenarios for the current Ebola outbreak

The Ebola virus is contained during the coming months, with few recurring cases, due to health care efforts of the international community, disease information, treatment-centers and local and national health support. Better systems for detection are implemented (see Molecular Computer Detects Ebola and Marburg Viruses)

The Ebola virus is a recurring and deadly threat for the continent of Africa for years to come until a vaccine is developed. Certain cases are quickly contained in Europe, the US and Asia. Local resistance to health care workers makes matters worse (see Suspected Ebola patient escapes hospital in Sierra Leone)

The Ebola virus becomes a constant international threat, airtraffic across the globe halts to a standstill and military control posts are common on borders from known infected countries.

Zombie style apocalypse where the Ebola virus mutates resulting in a pandemic that cause widespread death, chaos and destruction.