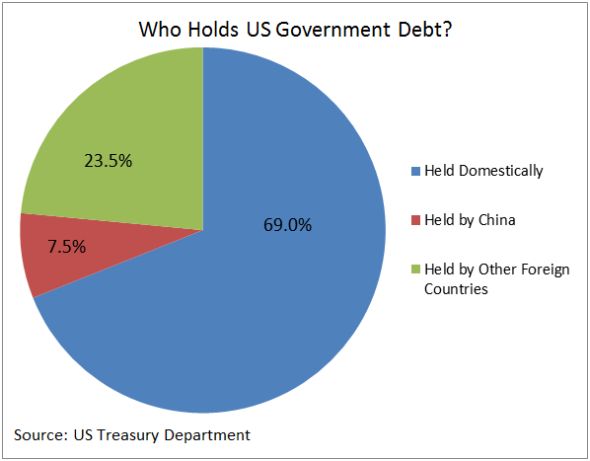 The global economic “race-to-the-bottom” game draws to an end:

The dollar’s share of China’s huge cache of currency reserves has been slashed to a record low, the Wall Street Journal reports, to which it adds the world hasn’t ended as a result.

But more recent data showing outright sales of U.S. securities by China suggests a less cavalier attitude would be in order. It isn’t the end of the world, just a portent of what can happen when the biggest buyer of America’s biggest export — its IOUs denominated in dollars — stops buying.

That would leave the Federal Reserve as lender of last resort to the U.S. government to fill the gap left by its biggest creditor. Think this Zimbabwe style of central-bank monetization of an unsustainable government debt can’t happen in one of the world’s major industrialized democracies? Well, it may be starting in Japan.

According to the Journal’s crunching of the numbers, dollar assets comprised 54% of Beijing’s $3 trillion-plus reserves as of last June 30, down from 74% as recently as the end of 2006. That’s based on data on China’s foreign-exchange reserves and the U.S. Treasury’s latest survey international holdings of U.S. securities. Those numbers show an outright increase in China’s holdings of U.S. securities, by $115 billion in the latest 12 months, to $1.726 trillion.

Beijing has made no secret of its desire to diversify from greenback assets — mainly U.S. Treasuries — and for the establishment of another reserve currency to use as a store of wealth and for international transactions. The European sovereign debt crisis has reduced the allure of the euro for those purposes. While Beijing has voiced limited support for the various schemes to ease Europe’s woes, it has added to its holdings of other, smaller currencies, such as the Australian dollar.

But more recent Treasury data show China has been selling Treasuries outright. And while the markets have been complacent to the point of snarkiness, MacroMavens’ Stephanie Pomboy thinks that’s wrong. Unlike other Cassandras, she’s been right in her warnings — notably in the middle of the last decade that the U.S. financial system was dangerously exposed to a bubble in U.S. real estate. Hers was a lonely voice then because everybody knew, of course, house prices always rose.

As for the present conundrum, there’s an $800 billion gap between the $1.1 trillion the Treasury is borrowing to cover the budget gap and the roughly $300 billion overseas investors are buying, Pomboy calculates. Banks, corporations and households have been doing little to fill that gap, preferring higher-yielding securities, so “it would appear the heavy lifting has been done by long-only bond managers extending duration and specs rushing to cover their shorts,” she writes.

But Pomboy has little doubt that the Fed will step in to fill the gap left by others. In other words, debt monetization, a fancy term for printing money to cover the government’s debts, which in polite circles these days is called “quantitative easing.”

“Having pushed interest rates to zero, launched QE1 and QE2, there’s no reason to believe that the Fed is going to allow free-market forces to destroy the fragile recovery it has worked so hard to coax forth now. And make no mistake, at $800 billion, allowing the markets to resolve the shortfall in demand would send rates to levels that would absolutely quash this recovery…if not send the economy in a real depression.”

But her real concern is a bigger one. “The Fed’s ‘need’ to take on an even more active role as foreigners further slow the purchases of our paper is to put the pedal to the metal on the currency debasement race now being run in the developed world — a race which is speeding us all toward the end of the present currency regime.” That is, the dollar-centric, floating exchange-rate system of the past four decades since the end of Bretton Woods system, when the dollar’s convertibility into gold was terminated.

The U.S. has benefitted because other countries needed dollars as reserves and for transactions. No other market has near the depth and liquidity of the U.S. financial system, the linchpin of which is the Treasury market. Not even the loss of America’s triple-A rating by Standard & Poor’s reduced the attraction of U.S. government obligations.

But other nations are beginning to push back. Brazilian President Dilma Rousseff Thursday criticized not just the U.S. but also Europe and Japan for creating a “tsunami” of cheap money. That has had the effect of forcing up currencies of emerging economies, which threatens to “cannibalize” those countries, she added. Not that this criticism is something new. In 2010, Brazil’s finance minister blasted the U.S. for provoking a “currency war” with the Fed’s second round of quantitative easing, QE2.

Yet, when the financing for huge government deficits dries up, central banks more often than not are forced into monetizing the debt. That is what appears to be happening in Japan, writes Societe Generale global strategist Dylan Grice. The Bank of Japan has stepped up its purchases of Japanese government bonds, ostensibly to fight the persistent deflation in that nation’s economy, a move urged by politicians there.

But Grice sees another dynamic at work. Even with Japan’s government paying only 1% on its debt, as deflation steadily shrinks its economy, the nation’s debt growth has become “explosive” to 180% of gross domestic product, well in excess of Greece. The Japanese government bond market has been supported by the nation’s pension system, but that’s reversed. The inexorable force of demographics has forced the pension fund to stop buying bonds as it pays out to meet the pensions of the growing numbers of retirees.

That the Japanese central bank has upped its purchases of JGBs just when the pension fund has stopped buying “may just be a coincidence,” Grice writes. But he thinks the BOJ will be forced to increase its purchases of government debt to cover the explosion of that nation’s debt/GDP ratio. The current purchases “might be the first step on the long road to an inflation crisis,” he concludes.

Japan’s financial bubble burst over two decades ago, so it’s taken that long to reach this point. It’s been only been a bit more than three years since the mortgage bubble burst in America, so there’s time to address its debt problem. China’s eschewing of Treasury debt should be a warning, but as long as the U.S. government can borrow for just 2% for 10 years, complacency reigns.

Meanwhile, sensible fiscal reforms such as the Simpson-Bowles are ignored. At the same time, fiscal policy is heading for a cliff of excessive, haphazard tightening beginning in 2013, including the end of the Bush-era tax cuts. That will throttle growth — and make the deficit worse. And QE3, 4, 5 or whatever will follow. It won’t be the end of the world, but it just could be the end of the dollar’s preeminence.

Will China’s Sale of Treasuries Force the Fed to Buy? via Barron’s.