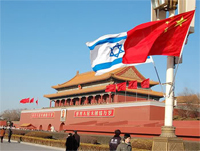 BEIJING/WASHINGTON (Reuters) – Israel has limited sway over China but hopes that sharing its fears about Iran’s nuclear program will persuade Beijing to back tougher sanctions on Tehran, Defense Minister Ehud Barak said on Friday.

Bank of Israel Governor Stanley Fischer and Israeli Deputy Prime Minister Moshe Yaalon are in China for what some analysts see as a last-ditch mission to craft U.N. Security Council consensus about cracking down on Iranian uranium enrichment.

Of the five Security Council veto-wielders, China is most resistant to employing sanctions to force Tehran, with whom it has energy, trade and diplomatic ties, to curb the project. Russia, another past naysayer, has been signaling flexibility

“You are living a symbiotic relationship with (China)… based on the amount of American bonds that they hold. They didn’t buy a lot of bonds in (Israeli) shekels,” Barak said in an address to the Washington Institute for Near East Policy.