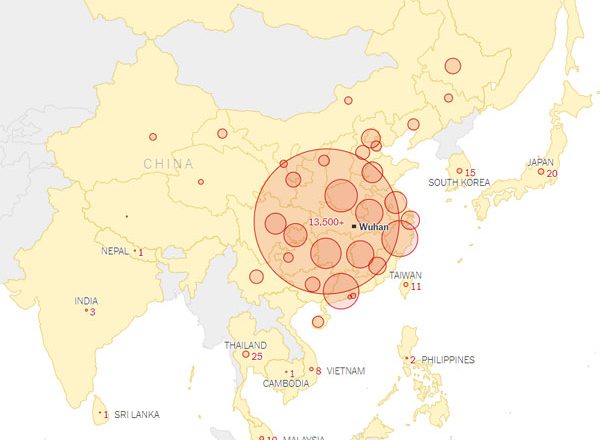 The narrowing gap between modeled and virologically confirmed cases is important for several reasons. First, it shows that the massive public health effort underway in China is, increasingly, ascertaining nCoV cases. As identification and diagnosis are important to prevent ongoing spread, this is encouraging. Second, the large leaps in reported cumulative case counts don’t only represent disease activity, but also a surveillance effort which is “catching up” with an epidemic. Third, for a given R0 (say 2.3), the decreasing horizontal distance between modeled curves and reported cases provides a semi-quantitative index of decreasing reporting times (from more than 10 days on January 27 to approximately 4 days currently).

We can also use simple models to infer ranges of plausible effective reproduction numbers since control measures were introduced in China. If we assume that control efforts were ramping up by January 24, 2020 (the date of fully implemented quarantine in Wuhan, and control efforts throughout China), we can modify model projections based on a given reduction in reproduction number. The epidemic curves associated with a given effective reproduction number (Re) after intervention on a particular date can be plotted as a series of “contours”, similar to altitude values on a map. It can be seen that such contours give us information about which (average) reproduction numbers may be plausible, and which are be implausible. For example, if we assume that average Re had been reduced to 1 after January 24, 2020, we would see fewer cases than are currently being reported. As such, this average level of control is not plausible. By contrast, reduction to an average Re of 1.5 is plausible, based on reported cases and model estimates up to February 3, 2020, but would also imply complete reporting.

We can also continue to plot case counts against such projections moving forward; if cumulative case counts flatten, and begin to intersect with “contour lines” horizontally, either control is improving and the mean reproduction number is falling or (a pessimistic interpretation), case ascertainment efforts are flagging due to limited laboratory or human resources. Conversely, if reported case counts cross the contour lines above them, that would imply an ever higher minimum value for Re.

The EU moves closer to recommending that travelers from the U.S. shouldn’t be allowed to enter the bloc after July 1 https://trib.al/DBnTQtw