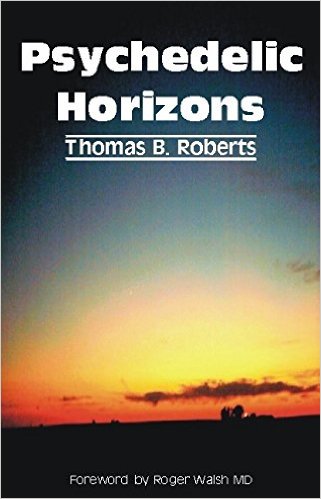 As a visitor to this webpage you might ask yourself – what in the multiverse does a review of a book about altered states of consciousness have to do with future studies and long term change?

The human mind has become the ultimate playground for radical interventions and the future of mind altering drugs has never been more exciting. With the introduction of psycho-pharmaceuticals; cognitive enhancers (modafinil, acetylcholinesterase inhibitors, ritalin), performance enhancers (beta blockers), memory enhancers (ampakines) and mood controllers (selective serotonin reuptake inhibitors) the need for a roadmap for healthy and therapeutic use of drugs becomes imperative.

In addition to curing illness, many people are looking at ways to be more than healthy, more than intelligent and eventually more than human. There seems to be a drug for every conceivable situation in life. To answer this development “Psychedelic Horizons” raises important questions about altered states of consciousness, how to explore the mind, tweaking intelligence and what intelligence is really all about.

Do you feel happy, creative and empathic? Do you understand the true nature and the fullest education of the human mind? Do you feel a sense of direction? Do you know how to augment your mental capabilities or tune your mind to be more productive and creative? These are some of the many questions raised in this highly intellectually stimulating book.

This is not only a book about psychedelic drugs. It’s a book about psychotechnologies; different methodes and techniques for attaining profound altered states of consciousness and their potential benefits for the human mind. Such psychotechnologies include hypnosis, dreaming, lucid dreaming, meditation, biofeedback, contemplative prayer and of course psychedelics among many other methods.

Since time immemorial religious experiences and psychoactive, psychedelic or hallucinogenic drugs has been closely related. Because of these close bonds a new term was coined in the late seventies to cover these aspects of psychedelic drugs; entheogens (“realizing the divine within”). The common denominator for psychedelic drugs is that they all, under controlled and desirable circumstances, may induce a transpersonal experience.

The term “transpersonal psychology” was coined by Stanislav Grof, the founder of the discipline. Transpersonal psychology deals with experiences involving an expansion or extension of consciousness beyond the usual ego boundries and beyond the usual limits of time and/or space. Ego, time and space are the three limits which are surpassed by transpersonal experiences. Many call this a temporary state of ego-death, a complete disassociation or dissolution of the ego.

Part one, “Snow White: Grofian Psychocriticism”, traces Roberts’ history as an explorer of the mind and later his work as a university professor. The book is written with a very distinct personal presence and with the language of someone who enjoys his expertise in a way you seldom find in academic books. This makes the reader engage with his ideas and concepts as a fellow adventurer. I even found myself smiling and laughing at some of his personal anecdotes.

As a professor of educational psychology at the Northern Illinois University we follow his students at the Foundations of Psychedelic Studies and their first classes dealing with Disney’s animation-classic “Snow White”. Roberts and his fellow students analyze the content of “Snow White” and find the many psychological and psychedelic elements running through the story. The intention of this exercise is to train the students in identifying psychological significant symbols in media, litterature and personal experiences. The excercise help the students in “thinking about thinking” and master the art of self-reflection.

Part two of the book, “The Emxis Speculation”, deals with the possibility of strengthening the immune system through entheogen induced mystical experiences. Although the chapters at times becomes a timid historical treatise of the challenges of making the psychedelics movement academically acceptable, the personal anecdotes makes the story worthwhile. The story about the annual Bicycle Day (in memory of Alfred Hoffman) and Roberts’ friend contemplating the feeling of being healthy when high on marijuana opens up the topic.

The challenge confronting Roberts is to find ways to scientifically meassure the effects of a transpersonal experience on the immune system. After scanning through hundreds of papers dealing with parameters that weaken or strengthen the immune system Roberts settles down with the Immunoglobulin A (IgA) as a meassurement for the health status of the immune system. Much of the research uncovered deals with the correlations between general mood and stress levels with IgA levels. It’s a fact that when you’re in a good mood your IgA levels are high compared to low when under stress.

Roberts goes on to posit the theory that the peak experience reached during a psychdelic session or in an altered state of consciousness increase IgA levels and consequently have positive health effects. Does this peak experience boost the immune system? Is humor and having a good time still the best medicine?

Although much research supports this hypothesis Roberts calls for more research into the healthy effects of psychedelics and similar ego-transcended states. These chapters represent a treasure trove of references to interesting books, journals, and organizations working in the field of pscyhedelics. Although much research was done in these areas in the sixties and seventies Roberts admits that little progress has been made since the hay-days of psychedelia. Unfortunately the so-called “war on drugs” has forced much of the research on psychedelic drugs underground. This is one of the developments Roberts sets out to reverse.

In part three, “Multistate Mind”, the book goes from being interesting to mind boggling. Roberts believe that the current paradigm in psychology and other scientific disciplines are riddled with the “singlestate fallacy”. The singlestate fallacy implies a belief that the only way of rationally comprehending reality is through our default sensory mode, the home base of our consciousness. Roberts argues that the human mind is like a computer that can run different types of programs. The different mindbody states (programs) that exist in the human mind give different perspectives and different modus operandi for the brain to work in.

Exploring these different states of consciousness expands regular intelligence and results in, what Roberts calls, multistate intelligence or metaintelligence. Many great inventions have been conceived in these altered states. Marquis de Condorcet thought and wrote with greater fluency in his dreams than in his waking life. Kekule litteraly dreamed up the benzene ring. According to journalist Alun Rees working for the London newspaper Mail on Sunday, Francis Crick percieved the double-helix structure of the DNA under the influence of LSD. The examples of great art and music produced under the influence of psychedelics is to numerous to mention here. Summa sumarum there are serious indications as to increased mental and cognitive abilities when operating in different states of consciousness.

Psychdelics can be compared to the microscope or the telescope. Like a microscope to the mind, we can experience and observe its content with greater detail. We can think of psychedelics as “psychomagnifiers”. The challenge for explorers of the mind is to use these newfound perspectives in the home base state of consciousness. Experiences gained during psychedelic session must be brought back to the ordinary state of mind and focused on scientific or personal obstacles. This is the topic of part four of the book, “Enlarging Education”.

Throughout this part of the book Roberts compares traditional psychological paradigms with the paradigms invoked by pscyhotechnologies. He compares the different perspectives of singlestate assumptions with multistate assumptions concerning everything from the essence of human nature and reality to cognition and intelligence. In the chapters dealing with education he takes these comparisons one step further and question how education differ from singlestate to multistate psychologies. In conclusion everything we know about pedagogics would have to change fundamentally since the basic assumptions are different.

The concept of the well-educated person has to be reconsidered too. Every scientific discipline would need to incorporate the different perspectives that different states of consciousness gives access to. Roberts encourage the establishment of a Center for Multistate Studies to research the many topics of mind altering techniques. The well-educated person should be able to select from a large number of mindbody states, enter them, and use the residential abilities.

Being an academic book there is one thing I miss. I would like to know more about the chemistry involved in the different mindbody states. What receptors are involved? How do the chemicals in pscyhedelics work in the brain? What parts of the brain are involved and how are they manipulated to cause the euphoric and psychdelic experience? I would like a separate chapter on neurochemistry and its relevance for different mindbody states. I’m sure Roberts could fill us in on this topic.

The book raises lots of very interesting questions for people generally interested in psychology, different states of consciousness and the future of mind exploration. I believe this book will wake up many people to the hidden powers of the human mind. We are much more intelligent that we think we are. If we knew how to tap into the vast potential of the incredibly intricate layers of human consciousness new possibilites would emerge. This book is a well-informed guide to the furthest reaches of what it means to be human.

If we don’t explore and map the human mind in all its magnificent states we risk becoming prisoners of our own minds. Aldous Huxley recognized this threat all too well.

“And it seems to me perfectly in the cards that there will be within the next generation or so a pharmacological method of making people love their servitude, and producing … a kind of painless concentration camp for entire societies, so that people will in fact have their liberties taken away from them but will rather enjoy it, because they will be distracted from any desire to rebel by propaganda, brainwashing, or brainwashing enhanced by pharmacological methods.” – Aldous Huxley.