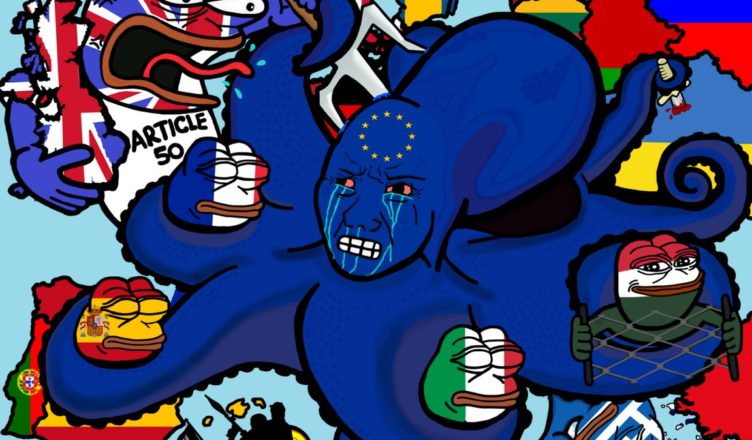 Let’s go though this one last time; Brexit, Trump, Russian psy-ops and the rise of far-right nationalism is the result of leftist complecancy.

The global overlords has played the statist to the point of usurping state power. The ancien régime of the deep state has become a tool for the tempocracy.

CEO of the Singularity

Future state powers will be run by the CEO of the Singularity and powers will compete in the blockchain for political and economic rule. The rise of distributed decision making and blockchain logistics will bootstrap sustainable habitats for future generations:

Neoreaction, or NRx, is an esoteric political doctrine of recent vintage. It became the locus of controversy in early 2017, after London art gallery LD50 convened a conference and exhibition featuring NRx ideologues, including Land, white supremacist journalist Peter Brimelow, and Anders Breivik sympathizer Brett Stevens. Protesters forced the gallery to shut down.

But the movement has less lofty origins than the currents of reactionary chic in contemporary art. In an article on Breitbart called “An Establishment Conservative’s Guide to the Alt-Right,” Allum Bokhari and Milo Yiannopoulos identified neoreactionaries as the intellectual vanguard of the movement, noting that they “appeared quite by accident, growing from debates on LessWrong.com.” Thought experiments in dispassionate rationality had led some users of the forum to dark places. Eliezer Yudkowsky has as much patience for it as he did for Roko. “I am actively hostile to neoreaction,” he has written.

Given the hostile work environment, Anissimov left MIRI in 2013. He opened a competing forum that would be more hospitable to neoreaction, the now defunct MoreRight, and started a publishing company. He has since written and self-released books like Our Accelerating Future, A Critique of Democracy, and Idaho Project, “a white nationalist manifesto that integrates futurism, survivalism, and simple common sense into a proposal for concrete action.”

Anissimov is a follower of the Italian fascist philosopher Julius Evola, whose work, The New York Times has reported, is probably also on Steve Bannon’s bookshelf. Given the prevalence of the alt-right on forums like 4chan, it’s not a great leap from the Californian Ideology to extreme reactionary views. As Angela Nagle has written in Jacobin, the “creative energy” of the alt-right is the product of a synthesis of an “amoral libertine Internet culture” with appeals to white male identity and resentment — not an uncommon demographic in Silicon Valley. Mother Jones has reported that according to neo-Nazi Andrew Anglin, Santa Clara County, where Apple and Intel are based, is the largest traffic source for his widely read white supremacist website The Daily Stormer. Anissimov may simply have been the Valley’s foremost innovator.

In contrast, Nick Land took a more serpentine path. A month before the 2016 election, Land made his first appearance as a columnist at The Daily Caller, the right-wing news outlet founded by Tucker Carlson. “Democracy tends to fascism,” he wrote, presenting a series of coy abstractions that betrayed his philosophical roots but withheld his political beliefs.

Land is an unlikely conservative media pundit, and a strange bedfellow of the alt-right. But like Roko, his writing helped bring the monster into being.

Source: Viewpoint via The Darkness at the End of the Tunnel  (Nick Land)

Last week we heard rumors that the U.S. Treasury and Secretary Mnuchin were planning to rush out some new regulation regarding self-hosted crypto wallets before the end of his term. I'm concerned that this would have unintended side effects, and wanted to share those concerns.