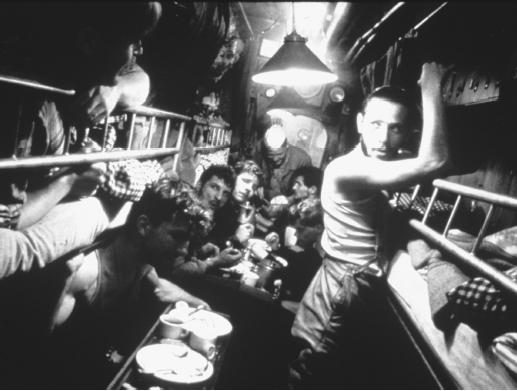 New Scientist magazine carries a nice article this week about the difficulties of propelling things on the micro- and nano- scales. The online version of the article, by Michelle Knott, is called Fantastic Voyage: travel in the nanoworld (subscription required); we’re asked to “prepare to dive into the nanoworld, where water turns to treacle and molecules the size of cannonballs hurl past from every direction.”The article refers to our work demonstrating self-motile colloid particles, which I described earlier this year here – Nanoscale swimmers. Also mentioned is the work from Tom Mallouk and Ayusman Sen at Penn State; very recently this team demonstrated an artificial system that shows chemotaxis; that is, it swims in the direction of increasing fuel concentration, just as some bacteria can swim towards food.

The web version of the story has a title that, inevitably, refers back to the classic film Fantastic Voyage, with its archetypal nanobot and magnificent period special effects, in which the nanoscale environment inside a blood vessel looks uncannily like the inside of a lava lamp. The title of the print version, though, Das (nano) Boot, references instead Wolfgang Peterson’s magnificently gloomy and claustrophobic film about a German submarine crew in the second world war – as Knott concludes, riding in nanoscale submarines is going to be a bumpy business.

The number of confirmed cases and deaths from COVID-19 is shocking and the growth rate is alarming.

But its clear now there is a 2nd global public health crisis developing.

Look, all I'm suggesting here is that if this man shows up and tells you to stop investigating the origin of COVID-19, listen to him.

Things from the past 📷🎥@moodvintage·
19h

A child's gas mask during WWII.

Where did we get $2 trillion? The American people are catching on.