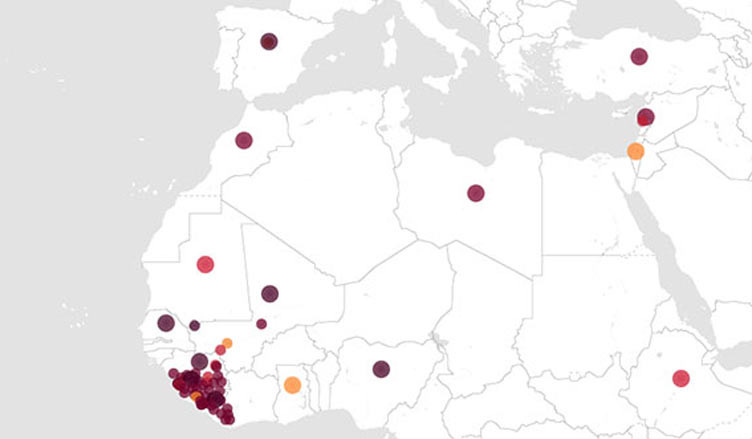 The current Ebola epidemic in West Africa has killed 3.439 people and is decleared a global health threat by WHO.

Over 7.000 cases has been identified in the region and the current death toll by country show 739 deaths in Guinea, 623 deaths in Sierra Leone, 2,069 deaths in Liberia and 8 deaths in Nigeria. These numbers could be several times higher due to unmonitored areas. A worst case scenario could result in over 1 million cases by the end of the year.

The outbreak, which is the 26. in recorded history, has an mortality rate between 50 and 90 percent depending on the treatement offered. The outbreak has an geographic reach that is uncommon and the potential for further spread is chilling. The first case was isolated in the US in the end of september. We are not facing a local humanitarian catastrophe, the entire planet is at risk.

States engaged in the region:

The US military is on the ground to support and protect health workers and field hospitals. The potential for military intervention is rising as cases of violence and attacks on health workers increase. In previous outbreaks the areas affected where isolated early in the outbreak. This time the outbreak is out of control. Meanwhile companies are ramping up their production of hazmat-suits and medical companies are testing medicine and vaccines.

The spectrum of responses is not limited to humanitarian aid and medical research. The military dimension of the outbreak is increasing. Even the microbiologist who identified the Ebola virus in 1976 has urged to support a “quasi-military intervention” to stop the current epidemic.

Kyrre Lind work for the Norwegian branch of Medecine Sans Frontière. He has been involved in administration and logistics in Africa, Asia and the Middle East. His current position within the Ebola respons team has given him an unique perspective on the current outbreak. Lind took time from work to answer a few questions about the outbreak, international respons and the uncertainty facing us.

International respons has been delayed. How did Medecine Sans Frontière confront the situation from the onset?

– Local organizations work with public information about the threat from the Ebola virus. These organizations also have kept track of infected indviuals and their contacts. These efforts has been limited and without the desired effect. A minority of the exposed individuals have been traced and put in isolation. One of the problems facing health workers is the high risk factors and the contagious nature of the virus. Many health workers have been infected due to lacking understanding of the vectors for transmission and inadequate protective equipment.

– Working on the ground with the Ebola virus requires expertise. The US ic currently training 500 local health workers pr. week.  Medecine Sans Frontière is training other organizations every week. Increasing awareness and knowledge of correct treatement and tracing of cases is a good sign.

“Lock down” and unintended consquences

“Lock downs” and restrictions on air travel is said to make relief efforts harder and increase distrust in authorities. What do you consider to be the best way to fight the Ebola outbreak?

– Isolation of large number of individuals in the population may be counterproductive and cause distrust. Although the “lock down” in Sierra Leone seem to be effective. The most effective way to stop the outbreak is with isolation centers. To do this we need a huge number of hospital beds. We need several thousand beds but only have a few hundred as of today.

– Morovian health authorities dismiss Ebola cases due to lacking treatment capacity. Infected persons seek medical help but are not admitted to health facilities. Infected persons return home and infect friends and family. This is a very dangerous situation. As long there is a insufficient number of hospital beds we will not be able to stop the outbreak. The worst outcome of this is that infected people restrain from contacting health centers due to mistrust.

– The international society need to keep two thoughts in their heads at the same time. We need more research on medical treatements and vaccines. This is only a part of the solution. To stop further spread of the Ebola virus we need to focus our efforts on the ground in the affected areas. Research on treatments and vaccines should be done in parallell.

– We are currently not able to serve the best medical treatment for patients in the affected region. In particular the situation in Liberia is of grave concern. The intensity and spread of the outbreak is of immense proportions and we are unable to provide the best possible medical treatment. In hospitals in Europe and the US there are very few patients and all medical options are available.

– The pharmaceutical industry is working hard to find a effective medical treatment. The problem is that these medicines are not being produced in sufficiently large numbers to treat thousands of cases in Guinea, Sierra Leone and Liberia. The production process is time consuming and increasing the production rate takes time.

– I am certain new medicine and vaccines will be released. The question is when they will be available. The current outbreak will not be stopped by new treatments alone and thousands will die in the process. What we need now is a massive ground effort to stop the outbreak.

Ebola reponse capacity in Europe and the US

larger populations elsewhere in the world? What can we do to reduced the risk of an Ebola pandemic?

– This is impossible to predict. The most radical estimations and scenarios show that hundreds of thousands could be infected in a few months. The spread in Nigeria has been contained in an effective manner. In a large degree due to an immediate and effective respons.

– I am not concerned with the possibilty of a larger outbreak in Europe or the US. We are tracking suspected cases continuously. We have systems for tracking, a quick respons and effective isolation facilities. People trust health authorities. If an infected person enters Euope or the US the individual will be isolated and further infections will be stopped.

– The current Ebola outbreak in West Africa is a serious threat to the region and is of great concern for neighbouring countries and the entire world community. This is an international crisis. It is our responsibility to relieve the affected region. Liberia, Sierra Leone and Guinea are unable to cope with the situation alone.

Videos on treating the Ebola Virus: