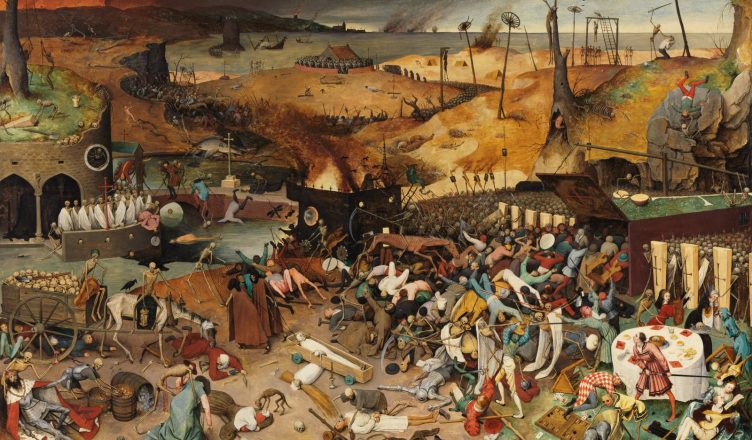 The Triumph of Death by Pieter Bruegel the Elder painted c. 1562

Historically pandemics have killed millions, devasted societies and changed the course of humanity. Earliest reports of influenza epidemics date back to 412 BC and were recorded by Hippocrates. A number of epidemics were described in the Middle Ages, and one of the earliest recorded pandemics occurred in 1580 according to Reviewing the History of Pandemic Influenza: Understanding Patterns of Emergence and Transmission.

The Black Plague killed aprox. 50 percent of the population in Europe during the Middle Ages and the 1918 influenza killed 20 + million worldwide in less than a year.

SARS-COVID-19 is history on repeat

2007: Talking about a flu pandemic worst-case scenario – CIDRAP
How unlikely? We don’t know. In the 1918 pandemic, guesstimates are that 30%+ of the world population got the flu and 2.5%+ of those who got the flu died. That was the worst flu pandemic in recorded history. So if you judge by history, a flu pandemic as bad as 1918 is very unlikely, and a flu pandemic worse than 1918, as far as we know, has never happened. On the other hand, the H5N1 virus has already launched the worst bird flu outbreak in the recorded history of the poultry industry. And as political scientist Scott Sagan has said, things that have never happened before happen all the time.

2010: Scenarios for the Future of Technology and International Development – Rockefeller / GBN (PDF)
The pandemic blanketed the planet—though disproportionate numbers died in Africa, Southeast Asia, and Central America, where the virus spread like wildfire in the absence of official containment protocols. But even in developed countries, containment was a challenge. The United States’s initial policy of “strongly discouraging” citizens from flying proved deadly in its leniency, accelerating the spread of the virus not just within the U.S. but across borders. However, a few countries did fare better—China in particular. The Chinese government’s quick imposition and enforcement of mandatory quarantine for all citizens, as well as its instant and near-hermetic sealing off of all borders, saved millions of lives, stopping the spread of the virus far earlier than in other countries and enabling a swifter postpandemic recovery.

2015: Assessment of human influenza pandemic scenarios in Europe – Eurosurveillance
The panel of experts was of the opinion that some of the parameters collected through the literature review were more relevant for mathematical modelling than for public health purposes, and others were considered less relevant for defining scenarios; consequently, all these were excluded: R0; age-specific CAR; communicability/generation interval; modes of transmission; incubation period; timing and duration of pandemic.

2015: Global Challenges: 12 risks that threaten human civilisation – SINTEF (PDF)
Unlike events such as nuclear wars, pandemics would not damage the world’s infrastructure, and initial survivors would likely be resistant to the infection. And there would probably be survivors, if only in isolated locations. Hence the risk of a civilisation collapse would come from the ripple efect of the fatalities and the policy responses. These would include political and agricultural disruption as well as economic dislocation and damage to the world’s trade network (including the food trade).

2016: Extreme Scenarios for Pandemic Risk – Gordon Woo / University of London (PDF)
The spread of an epidemic depends on national societal factors such as public education, the preservation of public order, reporting and isolation of cases, compliance with quarantine and movement restrictions and funeral ordinances.

2017: SPARS Pandemic Scenario – John Hopkins (PDF)
The Center’s SPARS Pandemic exercise narrative comprises a futuristic scenario that illustrates communication dilemmas concerning medical countermeasures (MCMs) that could plausibly emerge in the not-so-distant future. Its purpose is to prompt users, both individually and in discussion with others, to imagine the dynamic and oftentimes conflicted circumstances in which communication around emergency MCM development, distribution, and uptake takes place.

2018: Pandemic risk: how large are the expected losses? – WHO (PDF)
Given the uncertain nature of an influenza pandemic, in terms of both when it may occur and how large the mortality risks will be, we applied an expected-loss framework that accounts for the uncertainty over a long period of time. An expected-loss framework incorporates information on the risk of an uncertain event, e.g. a pandemic, with information on the severity or value of that event, e.g. the increase in mortality. Although it has been estimated that the 2013–2016 Ebola virus disease outbreak led to about 11300 deaths, the death toll from a severe influenza pandemic might be 2500 times higher than this.

2020:
How the pandemic might play out in 2021 and beyond – Nature.
COVID-19 Pandemic Planning Scenarios – CDC.
Global macroeconomic scenarios of the COVID-19 pandemic – Brookings Inst.
COVID-19 scenarios for the United States – MedRxiv.
COVID-19: Implications for business an executive briefing published July 30, 2020 by McKinsey.
Future pandemics: A growing existential risk by Copenhagen Institute for Futures Studies.